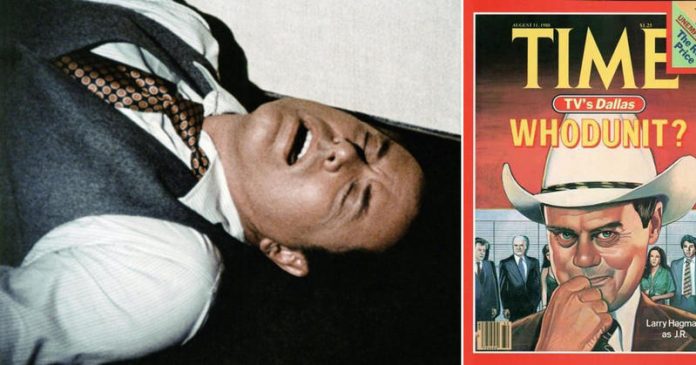 Throughout history, people have often said “the shot heard round the world.” Some might think immediately the game winning home run by Bobby Thomas to give the New York Giants the win over the Brooklyn Dodgers for the 1951 National League pennant. But in March 21, 1980, a shot was truly heard round the world leaving people asking one question…”Who Shot J.R.?”

In the 1980s and 90s, the soap opera “Dallas” was one of the most popular shows on television. Dallas, which was original suppose to be a five-part mini series on CBS, had over 14 seasons and 357 episodes. The most infamous episode of them all was the cliffhanger ending in the episode (season 3, episode 25) called “A House Divided.” This episode sent shockwaves through pop culture the like of which we’ve have never seen before. Granted, most of the people probably reading this article weren’t even born when this episode aired on CBS originally including myself, but that doesn’t dispute the historical importance of this season finale episode and the following months after leading up to season four.

After the season finale of the third season of the hit soap opera “Dallas”, it left viewers asking one of the most captivating questions of the 1980s: “Who Shot J.R.?” CBS and the Dallas screenwriters caught lightning in a bottle with this cliffhanger and as a marketing major, I couldn’t be more fascinated on how they were able to keep viewers so hooked on solving the mystery of the decade. T-shirts, buttons, bumper stickers, TV/Movie references, you name it. People were putting “Who Shot J.R.?” and “I Shot J.R.” on everything. The popularity of this marketing plan even reached the 1980 United States Presidential Election. The Republican Party distributed buttons that said “A Democrat Shot J.R.” hoping to give them a sight edge in the election (republican nominee Ronald Regan won the 1980 Presidential Election, just sayin’). Former Presidents (Jimmy Carter and Gerald Ford) and Queen Elizabeth (The Queen Mother) were so intrigued by the mystery, they even tried to use their influence to get the answer out of producers from the show, but no luck. Betting establishments, not only in Vegas but worldwide, were taken bets on who of the 10 main characters from the show actually pulled the trigger and shot the beloved character. I wonder who the members of Smokin’ Ponies alive during this time period would’ve put their money on?!? Larry Hagman, the actor who played J.R. Ewing, admittedly didn’t even know who shot him after being offered over $100,000 to reveal the answer. This was the best kept secret in Hollywood and the mystery wasn’t solved until 8 months later on November 21, 1980.

On November 21, 1980, the mystery to the question of the decade “Who Shot J.R.?” was finally solved. CBS played this brilliantly over the 8 months, which probably felt like eternity for viewers. The answer to the shot heard round the world until episode four of season four. Oddsmakers had J.R. Ewing’s wife, Sue Ellen Ewing, as the favorite to culprit behind the gun at 3 to 1 odds. But even Vegas can get it wrong. Sue Ellen’s sister, Kristen Shepard (played by Bing Crosby daughter, Mary) was the attempted murder. The episode had viewers thinking Vegas was right with Sue Ellen being the character who shot J.R. up until the climate ending where it was reveal that her sister (who J.R. was having an affair with; dirty dog) pulled the trigger.

The historical significance of this episode is unbelievable. It is estimated that 83 million viewers within the United Stated tuned into CBS to watch “Who Done It.” At that time period, that equaled 76% of American television viewers on November 21, 1980. To bring this into perspective and understand how many people that is watching the same thing at the same time, 96.4 million people watched Super Bowl LV across all platforms. 96.4 million people in 2021 versus 83 million people in 1980. The amount of viewers even beat out the amount of votes in the Presidential Election that year; 79.3 million votes were casted between to the parties nominees in the 1980 Presidential Election.

To this day, the Dallas’ “Who Done It” episode remains second (to the series finale of M*A*S*H, on the same network might I mind you) on the list of all-time most watched American television episodes.