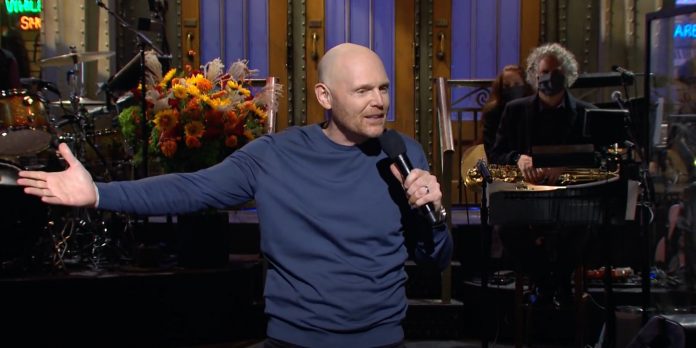 In a not-so-surprising move, the cold open centered around the vice presidential debate, the most notable moment of which was the fly landing on Mike Pence’s head (and hanging out a long time).

I don’t love Mya Rudolph’s Kamala, but the gold in this sketch wasn’t the debate segment.

Jim Carrey, as Joe Biden, decides he needs to rush to Kamala’s aid using a teleporter even though a random scientist, played by Kyle Mooney, warns him it isn’t ready. Biden jumps in any way then it jumps directly to footage from The Fly and Jim Carey, as Joe Biden, is now a fly. He goes to the debate, lands on Pence’s head, and he slowly begins to turn into Jeff Goldblum, dropping quotes from Jurassic Park and Hotels.com.

He is then joined by a reincarnated Herman Cain and hilarity ensues until Kamala hits Pence in the head with a flyswatter bringing the sketch to a close.

The whole thing got a little off the rails for a while, but how layered everything was really made this cold open different than most of what we’ll see this election season. It had a really weird vibe, and I’m totally here for it.

Bill Burr’s opening monologue is what a lot of people were left talking about after the episode. He began by again talking about COVID-19, something I feel every host is going to have to address. But Burr took a pretty hard left when he talked about it being a blessing that family members of those refusing to wear a mask would die because of it. Don’t get me wrong, I see what he’s saying, and it aligns a lot of the “we need another plague because of overpopulation” jokes Burr has made in the past.

He went on to talk about cancel culture, making a joke about racist grandparents that clearly didn’t land with the audience.

Burr then continued to compare the struggle of the LGBTQ community and African American community which rubbed a lot of people the wrong way. I understand the joke he was trying to make, but arguing about which minority group has it harder just doesn’t hit for a lot of people.

He then closed with a joke about white women making everything about themselves, which has gotten mixed reviews. Burr called out white women for making a movement about minority groups about their own oppression as females. The dig that seemed to land the most for people was,

“”You guys stood by us toxic white males through centuries of our crimes against humanity. You rolled around in the blood money, and occasionally, when you wanted to sneak off and hook up with a Black dude, if you got caught, you said it wasn’t consensual. Yeah, that’s what you did!….So, why don’t you shut up, sit down next to me, and take your talking to?”

Overall I didn’t love Burr’s monologue, but it is exactly what I expected given his type of comedy. It didn’t sound that far removed from one of his comedy sets, so I’m sure fans of Bill Burr enjoyed it.

Weekend Update has become the real standout of the show for me the last few seasons. I love the dynamic between Colin Jost and Michael Che. This week was pretty forgettable for me though. Most of the jokes centered around Trump’s COVID infection, which weren’t that different than what they were saying last week.

The first guest was Dr. Wenowdis, played by Kate McKinnon. McKinnon responded to each of Jost’s prodding questions with a version of, “We Know Dis”, and the whole thing spiraled until Jost asks McKinnon, “Kate are you okay?”. To which she laughingly responds “no” and explains that, because of her access to wigs and fake mustaches, just needed to create a character that “Know Dis” in today’s unknown climate.

The second guest was Pete Davidson. He ranted about J.K. Rowling ruining Harry Potter because of everything she has said about the trans community. Overall it was pretty funny and pointed out a lot of known issues with the fantasy series. He capped it all off with a joke that I feel like went unheard, “I haven’t read any of the books, I saw part of Azkaban on an airplane.”

While the news portion was forgettable, I think that McKinnon and Davidson’s segments were great. McKinnon introduced a character that we can immediately fall in love with, and Davidson’s was better than some of his past appearances have been.

While a lot of people are going to expect me to be saying that the Sam Adams Jack-O-Pumpkin commercial was the best, I don’t think that it was. The best sketch for me was the “New Normal” skit. We saw Burr and McKinnon meeting with friends after being in isolation for so long they had forgotten how to interact with others. McKinnon says “unpresidented” times, Burr says “Noon Normal”, and they spend the entire sketch apologizing because they don’t have a fancy deck or baked wings.

If you didn’t like Burr and his rants on cancel culture, you hated him as Don Pauly. In this sketch, he plays a mafia member returning to a new group of “woke” members. He gets corrected for things like race, sexual orientation, gender identity, and misogyny. While it was definitely tongue-in-cheek, after Burr’s monologue, it seemed like more complaining.

Jim Carrey as Joe Biden as Jeff Goldblum as a fly is something to behold. I don’t love Carrey’s Biden, but his Goldblum is aces.

(After finding out about J.K. Rowling’s transphobia) Pete Davidson praying that he doesn’t find out Winnie the Pooh diddled Piglet, which would ruin another one of his tattoos.

Since Bill Burr is pretty one-note as far as the type of character he can play, the episode fell a little short for me. Bill Burr is typically cast as “the angry white guy”, so we saw a lot of that this week, and everything seemed very similar (and flat) because of it. Typically when a host like Burr is on, it’s a moment for the rest of the cast to shine, and I didn’t see that happening much this week. Jack White was a good musical guest, but even he wasn’t enough to save a sinking ship this week.