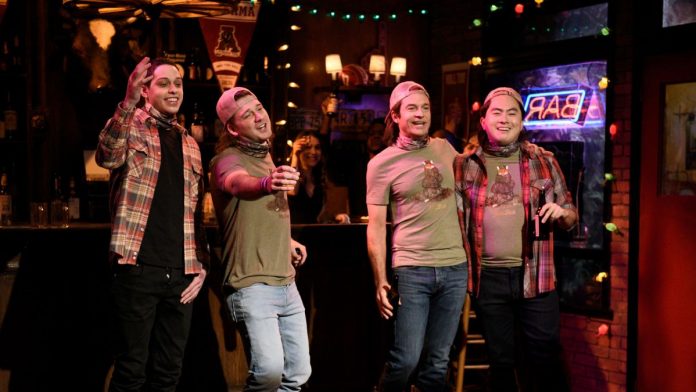 In its return from a short Thanksgiving Hiatus, SNL decided to give a second chance to Morgan Wallen. I mean what better guest to have around the holidays than a guest who needed a second chance! If you remember, Wallen famously spent the weekend before his SNL debut in Alabama drinking and partying with Crimson Tide (ROLL TIDE!) coeds which was shared all over social media. Lorne Michaels said no way and axed Wallen from the 2nd episode of the season. Cut to Jack White being the replacement and the birth of this blog series.

But before Morgan could sing his first song on SNL, he was part of a skit involving Host Jason Bateman playing a future version of Wallen and then cast member Bowen Yang playing yet a different future version of Wallen.  All suggesting that he shouldn’t drink and party at an Alabama bar (which got him booted from SNL), yet suggesting that just a couple more wouldn’t hurt.  The skit ends with Wallen singing his first SNL song ever, called Focused on the Future.  The skit wasn’t great, but the concept was and good on Wallen for making fun of himself for a bad situation.

Wallen’s first official song ended up being 7 Summers, one of TIME’S best songs of 2020 .  The track was first released on Instagram and eventually made its way to his next studio album.  7 Summers is said to be a dreamy or nostalgic track.  I can’targue with that.  It almost had a smooth jazz feel to it.  It never really hits a country music genre stride.  Which is fine by me as whenever I get in a car with country music on, I’m switching it to the next available station.

The second song of the night was Still Goin’ Down.  You know it’s a country song when you can’t bother your self with that last letter in a word.  Wallen lives up to that missing G by hitting his country stride in this song.  That country twang is as glaring as every other stereotype for a country guy…pearl buttons, cut off shirt, huge belt buckle and cowboy boots.  About the only thing not country in this song is his attempts at a gangster lean, the red mohawk on his guitar player and the hipster beard on the bassist.

Despite my near hatred for country music, Wallen did his genre proud.  He’s got a good voice which is built for his choice of music.  7 Summers is a great song to have led off the set.  Bring in the non-country folks like me and then hit them hard with Still Goin’ Down.  SNL did good too.  Wallen was contrite in his apology for messing up two months ago and to give him a second shot is the right thing to do.  Well done by both parties.  My last jab…let’s hope Wallen’s mullet never comes back in style!