Rogue is Everything Anyone Could Want in a Movie 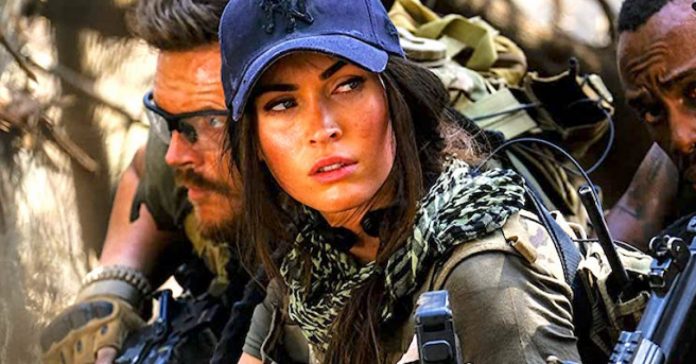 If you’ve seen the movie Rogue, let me first quell your outrage. I know, it’s not good…it’s amazing. The fact is: we truly deserve a film like this in these trying times. If you haven’t yet witnessed the masterpiece of cinema that is Rogue and you’re worried about spoilers, stop reading and watch it first. Otherwise, read on at your own risk.

So What’s Rogue About?

Check out the trailer, and it’s clear what you’re in for. A movie with Megan Fox trying to be an action star, while a lion runs around tearing faces off her brothers in arms.

The film opens in Africa, you know, where lions are, at a camp where they’re clearly doing some fucked up shit with these majestic beasts. We don’t really know what, but we see them prodding the lions with shock sticks into a smaller cage where someone shoots one of them in the head with the gun from No Country for Old Men. The lion-genocide is going fine until this female lion doesn’t cooperate (who would’ve thought). They try to scramble her brain, but they miss, and she wakes up as they’re trying to drag her would-be-corpse from the cage. She promptly throat-rips everyone in the building.

Cut to Lt. Badass Bitch (as played by Megan Fox) and her crew of nondescript, probably American but possibly Australian military men. They’re specifically at a camp rescuing a governor’s (or senator or some other politically powerful person’s) daughter who has been kidnapped by poachers. We don’t know this until they stumble into a room where three girls are kept in small cages. In a bold character choice, Lt. BB says she only wants to save the one girl and leave the others behind, a move that would surely endear her to the audience.

All of this is just the first 8 minutes. I watched this movie over the course of three different nights, not because it was bad, but because I was so jacked up I knew I wouldn’t be able to go to sleep if I kept watching.

Anyway, they immediately escape the compound and have a high-speed chase, including a fire-fight, where half of the crew is taken out. They get backed up to a cliff and jump off into a river. They walk down this river while these unappreciative girls that would’ve been sex slaves complain about being too weak to move on. Then a crocodile eats one of them. Like I said, a lot of bold moves being made in this movie.

But Where Are the Lions?

They finally make it to the lion camp from the beginning, and it’s obviously deserted. They almost immediately realize what it was being used for, but they don’t think much of it at the time because there aren’t any kings (or queens…Come on guys, it’s 2020) of the jungle to be found.

One by one the crew gets taken out by the female lion from the beginning, who now has a cool scar over her eye to let you know she is a villain.

Things really ramp up when we find out that one of Megan Fox’s crew was formerly a member of the militant, sex-trafficking group from which they just rescued the girls. He explains that it all happened when he was a child or because he had children or something that seemed justifiable given his circumstances. Then nothing really comes from it except these white girls awkwardly yelling at and threatening to shoot this crying, remorseful African man. Again, bold moves.

Things get amped up again when the sex-traffickers find them at the lion camp. Now there are two monsters to worry about…

The African-born member of the team ultimately has a one on one fight with a leader of the group. He doesn’t win the fight, but, in the most gruesome effect of the film, his arm is almost completely hacked off with a machete before Lt. Bad Bitch saves him.

All of it comes down to a final faceoff between Megan Fox and the leader of the poaching sex-traffickers (in early versions of the script I bet they were Neo-Nazis too). She lures him into a room where she knows female scar is, gets locked inside, and utters the line, that I’m sure had everyone in the crew creaming in their dungarees when they thought of it, “Which bitch is going to kill you?”

Needless to say, it’s the lion. Then Megan Fox survives because (Hollywood has to push their agenda that women need to have children) they find out that the lion was really just protecting her cubs all along. All they needed to do to save countless gruesome deaths was to find these little cuddly kitties.

At the conclusion of Rogue, there is a title card that explains how lions are legally bred and killed in similar camps for their fur. I agree that poaching sucks and killing animals is even worse…But bro, did you just watch your own movie? This title card means that the screenwriter set out to make a movie that would have us siding with the lion, who is not discriminating good guys from bad as she’s slashing faces. BOLD MOVES.

It’s almost like Big Lion was protecting their own interests in this movie. The lion ripping tracheas and tearing off faces the entire movie looked so bad visually that there is no doubt it is 100% CGI. At the very end of the movie, the CGI lion is shown next to real lion cubs, and it is laughable.

Should You Watch It?

Absolutely, 100% yes. Rogue is not a good movie. That should be clear from minute one. The best bad movies are ones that take themselves seriously though. You can tell that Megan Fox went after it in this movie. She made character choices. She wasn’t phoning it in, she was giving a performance. The writer made choices. They were attempting to create a commentary on the poaching industry, sex-trafficking, and probably much more. Was anyone successful in anything they were trying to accomplish? No, not really, but to try and fail this spectacularly is an achievement all on its own.