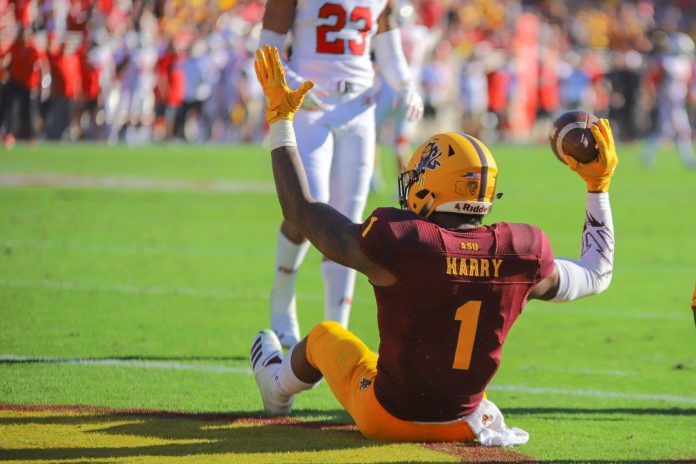 Star is Born In Arizona

A Canadian born athlete started his football career in Arizona, which he remain throughout his high school and college career. N’Keal Harry, a multi-sport standout athlete, started his high school career at Marcos de Niza High School, but would later transfer to Chandler High School. At Chandler High School, Harry would truly start to separate himself amongst the rest of the high school athlete by receiving a 5-star rating by Rivals And being one of the top wide receiver recruits in the country. In his junior year, Harry caught 13 touchdowns for 657 yards. And in his senior year, Harry caught 7 touchdowns for 802 yards. Harry would be known for one of the craziest plays in high school sports’ history. Oddly Enough, it would be a play during a football game, but rather a basketball game! Harry would summon his inner Shaquille O’Neal and on a break away would smash the backboard on a two-handed slam dunk.

After being offered by top tier colleges like USC, Oregon, Texas A&M, N’Keal Harry would stay loyal to the home state and select Arizona State University. He would immediately start at wide receiver and boy did he make a difference right out of the gates. Harry would rack up 58 catches for 659 yards and 5 touchdowns. N’Keal Harry was honored by multiple sources as a Freshman All-American. His success would continue into his sophomore season where he would finish with 82 catches for 1,142 yards and 8 touchdowns, which earned him First Team All-Conference. The hype of this former 5-star high school athlete hit its all-time high in his junior season with the media attention of being selected to the 2018 AP Preseason All-American team. Harry would not disappoint in the 2018 season with 73 catches for 1,088 and 9 touchdowns; 3 of which came in an upset victory for the Arizona State Sun Devils over the #15 ranked Utah Utes. Harry would also help the Arizona State Sun Devils beat the USC Trojans with a remarkable one-handed catch and a punt return for a touchdown. N’Keal Harry would forego his senior year and enter the 2019 NFL Draft. Harry would cement his legacy as one fo the greatest receivers and players to don a Sun Devils maroon and gold uniform.

Fun Fact: N’Keal Harry’s acrobatic one-handed catch against the USC Trojans was considered one of the best catches in ANY level of football by Colin Cowherd.

And with the 32nd pick in the 2019 NFL Draft, the New England Patriots select N’Keal Harry, wide receiver, Arizona State University. Granted, the first two season of N’Keal Harry‘s NFL career hasn’t been what anyone expected but given the circumstances, I wouldn’t chalk him up as a bust by any means. Harry joined the New England Patriots in 2019, aka Tom Brady’s last season with the Patriots. Everyone and their mother knows Brady doesn’t like to work the ball into the hands of a rookie, so the first season was very much a learning season for Harry. Harry’s second season started off with the surprising departure of Tom Brady and arrival of Cam Newton, so another season with a brand new quarterback. In his first two season, N’Keal Harry has caught 45 balls for 414 yards and 4 touchdowns. With the New England Patriot sticking with Cam Newton, at least to start the season, and drafting a very efficient rookie Mac Jones, Harry future looks very bright and would be my player to watch in 2021.

Player Of The Month: Jalen Hurd

For the people who know me, they know that I love a good story for athletes especially when it comes to playing...
Read more