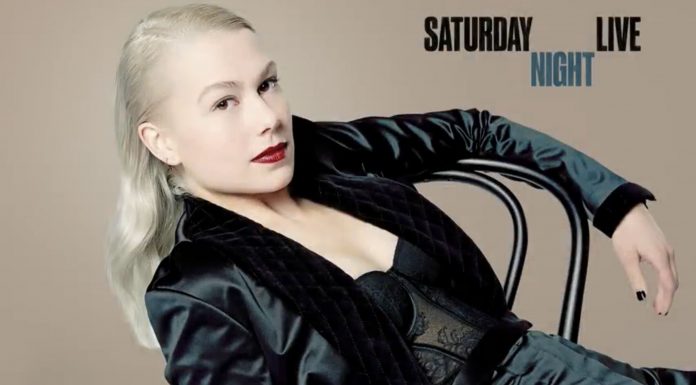 Dan Levy hosted S46:E11 of SNL this past week and the musical guest was Phoebe Bridgers.  This is a problem for your guide to SNL music because I have no idea who she is.  Never heard of her, but I know her now!  Phoebe is a rising star in the music industry as a singer/song writer and released her latest album, Punisher, this past summer, during quarantine.

Phoebe led off her SNL set with “Kyoto”, a song about her complicated relationship with her divorced dad.  The SNL sound guy didn’t do her any favors because at the beginning, her vocals were underpowered.  Phoebe didn’t help herself any when she hit the first verse and her voice faltered for a bit.  This was all supported by a background of Cobra Kai Johnny skeleton costumes for her and her band.

I Know the End

Bridgers followed up with an even more complicated song.  “I Know the End” was originally a break up song after her relationship with her drummer ended, but it morphed into more of a 2020 angst song regarding her feelings about politics and the world in general.  This girl digs deep when it comes to writing her lyrics, that’s for sure.  This time, her band continued with the skeleton costumes, but she replaced hers with a black dress with pearls draped to replicate a rib cage.  I’m still trying to figure out the meaning of all this, but the little I know of the artist, this probably has to deal with her grim outlook on life.

Let’s get to the part that everyone wants to talk about.  In the end of her song, “I Know the End” she ends up smashing her guitar into a monitor.  The song starts out as a ballad, but towards the end it takes a turn.  In interviews, Bridgers claims that it’s a “Metal” song.  First, it’s not Metal.  Nothing about “I Know the End” is metal.  With that cleared up, what is the song, again, it’s a ballad that devolves into chaos.  Nothing wrong with that.  In fact, I love it.  It’s a great ending to a song from 2020.  Her backups, guitar, trumpet and drums, all lend to the chaos with their distortion before Bridgers lets out a primal scream.  This can all be found on the original, studio version.  Her live SNL version included her smashing her guitar on a monitor not once, not twice, but SIXTEEN TIMES!!!  Yes, I actually counted.  I don’t think Pete Townshed (maybe the best known artist for guitar smashing) ever took more than 2-3 swings to finish off a guitar.  Does this mean that Phoebe’s Danelectro Dano 56 Baritone guitar is indestructible?  Or does it mean that Bridger should call Townshed for some quick lessons?  Maybe both!