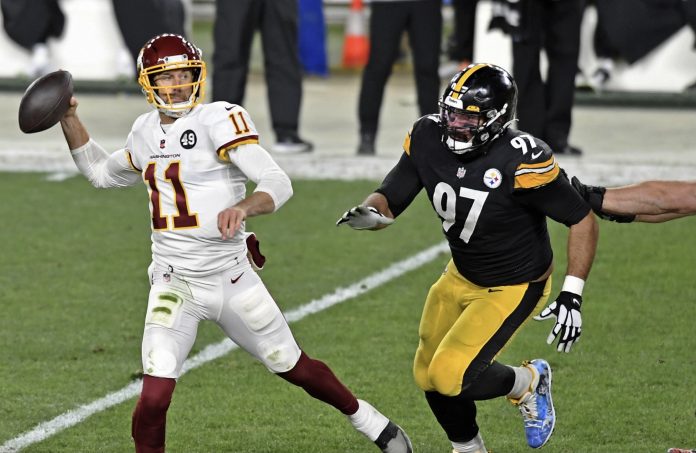 You heard it here first folks! Comedy Chair is officially calling the 2020 NFL Comeback Player of the Year, Alex Smith of the Washington Football Team!

Like every year in the NFL for the last 48 years, the last remaining undefeated team goes down before the end of the season. The Pittsburgh Steelers came into yesterday at 11-0 with only 6 games left to achieve what only the Miami Dolphins was able to achieve in 1972, a perfect regular season. The Steelers hosted the Washington Football Team as the first Monday Night game during this unique COVID effected season in week 13 of the NFL. And “unique” is the best way to describe not only this season, but also this game. The Washington Football Team beat the undefeated Pittsburgh Steelers 23-17. Like NFL Hall of Framer Larry Csonka, lite up your cigars and enjoy Comedy Chair’s unexpected part two of Alex Smith: Ultimate Comeback Story.

(Scene: Larry Csonka, former NFL fullback for the Miami Dolphins, is sitting in a dark brown leather arm chair. To his left, a wood burning fire place. To his right, a side table with a smoking cigar sitting on an ash tray and a glass of whiskey with condensation. A large book titled “Alex Smith, Ultimate Comeback Story“ in his worn hands of the NFL Hall of Framer. Camera focuses on Csonka turning the page to the next chapter titled, “Week 13 Spoiler”.)

As you know, Alex Smith has already made a NFL comeback for the ages by overcoming a career and life threatening injury he suffered in 2018. But something was missing with this comeback, just can’t quite but my finger on it. Hmm, oh yeah, let’s add beating the last remaining undefeated team in the NFL on top of making his first snap, first throw, first completed pass, first touchdown, and first win since the comeback. Alex Smith played a great game completing 31 of his 46 passes for 296 yards and a touchdown. His solo touchdown was beautifully executed 15 yard pass to the Washington Football Team’s Tightend, Logan Thomas. This veteran had a couple tricks up his sleeve as well. Right before the first half was coming to an end, the Washington Football Team was in field goal but suffered a slack. The Washington Football Team had no timeouts left and not enough time to get the field goal unit on the field to drill a 3 point field to get their first points of the game. So this crafty veteran, after being sack, ran off the field with the ball which caused the referee to blow his whistle for an “Administrative Issue”. Yep, you’re reading that correctly, an administrative issue. Important fact about an administrative issue in the NFL is that it stops the clock, which gave the Washington Football Team’s field goal unit enough time to get set and drill a 49 yard field goal.

Here is the explanation Alex Smith gave about sprinting off the field with the ball:

In theme with this unexpected part 2 to Alex Smith’s NFL comeback, we had another comeback happen on Monday. The Bloody Sock. Ok, so maybe not everyone remembers this reference, but the bloody sock plays an historic role in sports history. In the 2004 MLB ALCS, the Boston Red Sox played the New York Yankees. In Game 6, the veteran right hand pitcher Curt Schilling deliver one of the signature moments in the MLB when he pushed himself through 7 innings to help force a game 7 with the New York Yankees. The Boston Red Sox would go on to win the ALCS series against the New York Yankees. Every sports fan should think back to the most epic comeback in sports history, but the image of Curt Schilling standing on the pitchers mound with blood seeping through his Boston Red Sox uniform sock where he had a torn tendon in his ankle will always surpass it.

So to add to the theatrics of the Washington Pittsburgh Week 13 Monday Night Football game, Alex Smith suffered an injury to his leg. Don’t worry, it wasn’t as bad as you think. Smith was cleated in the first half by a Steeler’s defender, which caused a cut on his leg and the cut began to bleed profusely. Not only did Alex Smith stay in the game, but he pulled off the victory forever cementing this as “The Bloody Sock Game Part 2”.