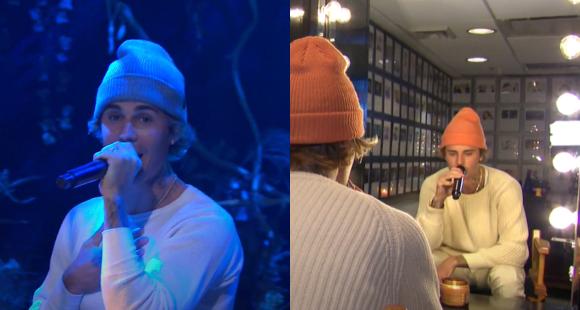 Justin Bieber was the musical guest for Saturday Night Live this past weekend (S46:E3). Hard to follow Jack White (see my previous blog post here), but Bieber was assigned the task. I’m not a Belieber, so this was an uphill battle for Bieber. It’s going to be uphill both ways for me having to write this review, but I guess I put myself in this position as the unofficially-official SNL Musical Guest reviewer.

Sticking with his new minimalist style, Bieber appeared in a simple white long sleeve and grey beanie.  Covering up what is now his trademark, plenty of ink.  I bring this up just to make the review longer than a couple of sentences.  Bieber started off with his one-month-old song, “Holy” featuring Chance the Rapper.  Bieber stuck to the script with his first set.  This song seemed very produced, almost as if he were in the studio recording it instead of providing a live performance.  Because of that, he failed to hook me.  He does well in lifting up this gospel-style tune, but that’s to be expected from this gifted artist.  Even I can’t deny that the kid has talent.

His second set featured only minor wardrobe changes for his performance of yet another recently released song, “Lonely” with Benny Blanco accompanying him on piano.  This was yet another soulful performance from Bieber.  I have to give it to him, he can sing. There’s no doubt there. The song started off with Bieber in his dressing room, walking the halls of SNL to the stage while belting out a song that was basically a biography of the problems he went through as a child star.

I wanted to hate everything about Bieber’s SNL sets, but there is a reason why he’s been a musical guest four separate times since 2010 and even twice this year.  He’s good.  This won’t make me a Belieber (nothing will and I know two of my fellow Comedy Chair team members are Disciples of the Bieber gang), but I was really hoping that Bieber would take a risk like another former child musician, Miley Cyrus, when she did her best Joan Jett impression changing it up and putting a rock ann roll edge to “Wrecking Ball.”  Unfortunately, he didn’t.  Maybe his handlers are trying to rehab his image after some tumultuous years.  I don’t know why, but this apparent musician with an edge failed to bring that edge to his performance on SNL.