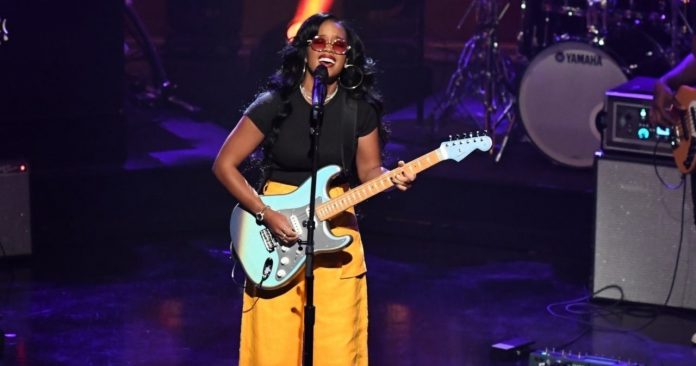 I don’t know what long-time SNL producer Lorne Michael was thinking, but he had 15-time Grammy winner Adele hosting and not singing.  Not only that, but the skit right before the musical guests first performance had Adele singing a medley of her greatest hits.  Talk about big shoes to fill, but H.E.R. laid it down during Season 46, Episode 4 of Saturday Night Live.

H.E.R. knocked it out of the park in her first set. She went withthe jazzy stylings of “Damage.”  H.E.R. shows off her vocal stylings with a combo and back up singers behind her.  When I’m doing these reviews, especially with artists I’m not super familiar with, I look at the live version compared to the produced studio versions and whether the artist can perform live and whether the artist likes to step out of their comfort zone.  H.E.R. has the vocal range to pull off this song time and time again without the need for producers, but she stays true to the original form of the song.  Nothing wrong with that, especially when you have her talent.

At least with set #2 H.E.R. did not have to follow the lead-in of another Adele medley.  H.E.R. did it again when she debuted her new single, “Hold One.”  Once again, she shows off great vocal range with the support of her band mates and background singers.  This time, add in her ability to play guitar, kicking out a great little solo in which she channeled her #1 influence, Prince.

If you don’t like your artists or athletes making political statements, you might want to refrain from watching SNL.  Two of the four artists have used the national stage to put forth a political statement and H.E.R. brought attention to ending the Special Anti-Robbery Squads in Nigeria with her band sporting #endSARS t-shirts.  If you hate it, turn around, but keep the audio on because H.E.R. made me a fan tonight and SNL has been killing it with the musical guests thus far.  All four have been hits!