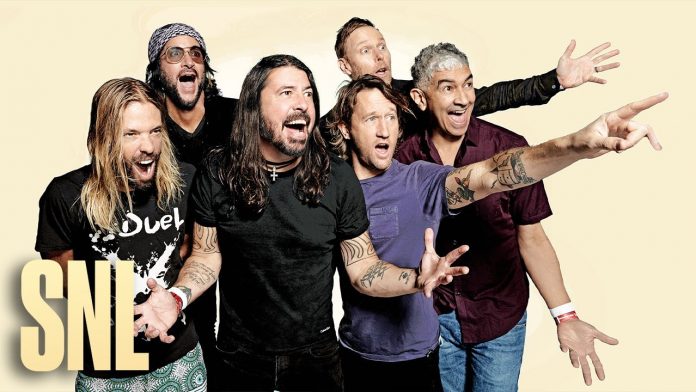 I’ll try not to let my fan boy out too much in this review, but it’s gonna be hard.  Foo Fighters took the stage for S46:E6 of SNL. Some people are complaining about the lack of “current” talent for an SNL musical guest, but the Foo are perfect for this spot as they have…wait for it…a new album coming in February 2021! So many good feels on Saturday.  A new Foo Fighters album is coming.  A President was finally declared.  Dave Chappelle hosted SNL and the Foo absolutely KILLED it!

Debuting their new single Shame Shame, Foo Fighters take a pleasant departure from their heavier, faster, louder usual songs.  Driven by the steady and funky beat from Taylor Hawkins, Dave Grohl leads this song through some groovy lyrics.  Foo also filled out their sound with a couple of back up singers.  Definitely needed here.  While I love Grohl as a front man, I would never suggest that he’s one of the great vocalists of all time and when Foo slows down and needs to lean on a vocalist, it’s not a bad idea to give Dave some help.

While the Shame Shame single dropped (and is currently available on streaming services) after the SNL set, no other release was provided.  So, instead of playing another new single, Foo feel back on a reliable, beloved rock anthem, Times Like These.  Not only that, but it seemed to fit the spirit of the moment perfectly, with lyrics like: “I’m a new day rising/I’m a brand new sky” and with the Chorus:

“It’s times like these you learn to live again

It’s times like these you give and give again

It’s times like these you learn to love again

With a list of accolades longer than most bands careers…25+ years of rock n roll; 10 studio albums; 11 Grammy’s; Likely 2021 RnR HOF Inductee…the choice of Foo Fighters as a musical guest is never a bad decision and here, they proved Lorne Michaels correct, yet again.  Foo rocked SNL for the 8th time and hopefully, not the last.  Well done boys and look forward to when I can see you in concert again!