Chicago Bears Shocked The World At 11 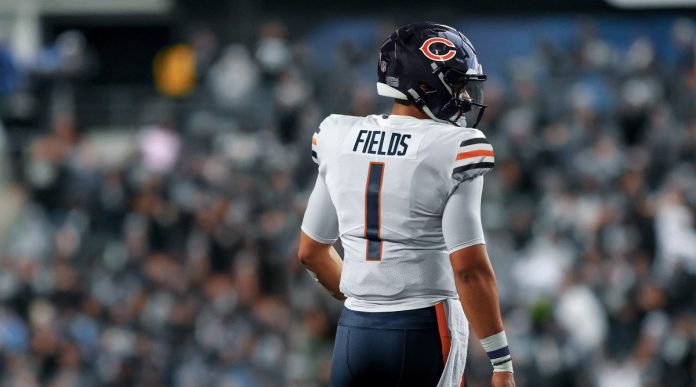 In 2017, the Bears traded up from 3 to 2 to select a franchise quarterback.  That didn’t work out and he’s now a Buffalo Bill.  So, what do the Bears do for a QB For 2021.  Well, there’s Nick Foles…lol.  Hold on, I need to pick myself up off the floor.  Ok, seriously though, they have the Red Rifle, Andy Dalton.  Shit…there I go again, back on the floor cracking up.  So, Ryan Pace does the only thing he knows how to do, and that was mortgage the Bears future to try and save his job today.  Here’s the trade:

After the trade, and with the 11th overall pick of the 2021, the Bears drafted…

The Bears traded up to draft a quarterback from a school whosebest NFL QB product was Mike Tomczak.  OSU is not exactly a QB factory, but by all accounts, Justin can change that.  First, he stands the prototypical 6’3”.  No joke, that’s the ideal height for an NFL QB.  He started his career at University of Georgia, but instead of beating out Jake Fromm, he transferred to Ohio State earning the Heisman Trophy consideration.  That same year, he lost to Trevor Lawrence’s Clemson Tigers in the College Football Semifinals.  In 2020, while dealing with Covid restrictions, Justin led OSU to the CFP Championship, only to lose to the semi-pro football team that is Alabama, led by Mac Jones who was drafted 4 picks later by the Pats.

The real question I have is not whether Fields will be a quality NFL QB or even a franchise QB (he better be, Bears fans deserve one), but it’s whether Ryan Pace paid more than he should have for the 9 spot jump up in the draft.  If you didn’tknow, someone created a draft trade value chart.  Use the Google machines and you’ll see what I’m talking about.  The way it works is that every pick in the draft has a certain point value attached to it.  So, let’s look at the point values of the picks involved.  Oh wait, one thing you need to know, when doing the math for future year draft picks, you use the 16th pick of that round.

Those are the point values, and the math is simple.  The Giants 11th overall pick is worth 1250 points.  The Bears picks that they gave the Giants are worth a total of 1926.2.  The Bears overpaid by 676.2 points or a late first round pick.  Meaning, why did the Bears give up their 1st rounder in 2022?  Especially when you take into account that the early line for the Bears is a 7-winseason which would put them in the middle of the 1st round when it comes to drafting in 2022.

When I did the math in 2017, I noticed that Pace overpaid.  The value was 2600 to the Bears and 2717 to the 49ers.  That boiled down to an extra late 3rd or early 4th round pick.  That’s pretty hefty, when you consider that could be a Roosie Colvin or Raymont Harris.  How about a Doug Baffone or Marcus Robinson.  Maybe an Alex Brown.  That’s what Pace gave away to get a QB that’s now 2nd string in Buffalo.  This year, Pace gave away even more.  He gave away an extra 28th overall pick.  He gave away someone like Mark Ingram or RW McQuarters and any number of OLinemen that had lengthy careers.  Something the Bears are in desperate need of right now!

That begs another question, was the trade even needed?  The Patriots were the only other team to draft a QB after the Bears took Fields.  They took the pure pocket passer.  Something Belichick had with Tom Brady and craved again after 1 year with the now injury prone Cam Newton.  Who else?  The Washington Football Team?  Maybe, but they picked at 19.  It would have cost the Bears a lot less to move to 18 or even 17, than it would to 11, but hey, let’s hope Fields pans out and becomes a franchise QB and leads the Bears to their next Super Bowl win so we can all forget about Pace overpaying to move up in the draft.  BEAR DOWN!