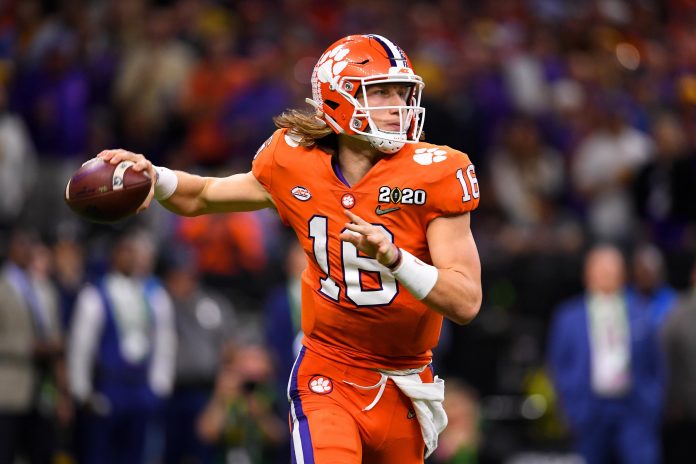 At this point, I’ve watched about two games from each of the guys that should be major players come draft day. While I haven’t looked closely and done any “deep” analysis, I’ve gotten a feel for the type of player they are and what each of them brings to the table. Full disclosure, there are some guys I haven’t watched any film on yet because I don’t expect them to ever amount to more than a backup. That’s not a knock on backup QBs, they still make more money than I can imagine, and they don’t have to risk injury by actually playing. As of today, here’s how I’d rank the incoming rookie QBs.

This long-haired god is as close to a lock for the 1.01 as it gets. He’s being compared to the likes of Peyton Manning and Andrew Luck, so you have to take notice. Lawrence has been a top prospect since coming out of high school, and, through college, that view has never changed.

In terms of his playing ability, TLaw is a smooth runner that really pulls away from defenders in the open field. He’s also deceptively strong. Watching him shake off tacklers in the pocket or run through would-be-tacklers proves that. While it’s hard to get a read on how talented he actually is because of all the talent around him, it’s pretty clear that he’s the safest prospect in this group.

Despite a loss in the National Championship, I think Justin Fields remains the second-best QB in this draft. If he would have won would I be saying he’s the best? I don’t know, but that wouldn’t have been out of the question. Fields follows a long line of Ohio State QBs that have busted, so fear or uncertainty is understandable. I do think Fields is more than a system QB though.

Like Lawrence, Fields was also a top prospect coming out of high school. The issue with Fields is he went to Georgia and couldn’t seem to beat out Jake Fromm. That should scare you, but remember, Joe Burrow lost a QB competition to Dwayne Haskins, so maybe it means nothing. Fields is a much more exciting prospect, as Ohio State threw the ball downfield way more often. Like Lawrence, he is a running threat, but Fields either doesn’t or can’t avoid big contact as often. We saw this with the hit he took in the semis. Overall I think Fields will make it in the NFL, and while he isn’t as safe as Lawrence, he could have a higher ceiling.

Let me start by saying that I don’t like Zach Wilson. I think he played at a lower level than most of the other prospects on this list, and, because of that, it is harder to gauge where he’s at. Wilson is touted as being one of the most accurate passers coming out this season. I chalk a lot of that up to him forcing a lot of pass interference calls and his receivers being very talented when it comes to 50/50 balls.

Wilson does like to run, but I think he isn’t as good a runner as most of the other prospects on this list. Don’t get me wrong, Zach Wilson is a smart QB who clearly is a student of the game, but I think there are limitations most are going to overlook. His numbers jumped significantly from his sophomore to his junior season, so he either improved greatly or things just seemed to fall into place for him. I lean towards the latter. That being said, I still think he is a top 3 prospect in this class.

People love Trey Lance, and I don’t get it. Yes, he went all of his 2019 season without throwing an interception, but he wasn’t even that accurate. He finished the season a shade under 67%, which is where Mitch Trubisky finished this season, and he won’t be a starting QB next year. Lance is even more difficult to gauge than Wilson because he has only started 17 games, and he’s only played FCS competition. Have other QBs come from smaller schools and been successful? Of course, but I see a lot of red flags when it comes to Trey Lance.

Lance is a great runner, that can’t be denied. He actually finished the season with only 23 less rush attempts than he did completions. I don’t see Lance as a QB that will come in and be ready to start right away, but, because of his rushing ability, his ceiling could be high.

Mac Jones just won the National Championship and was a Heisman contender, but prior to this season, he wasn’t even seen as the outright starter for Alabama this year. He put up numbers comparable to Tua, but he’s not nearly the same level of talent. I think he will be a career backup, but he could eventually get a shot depending on where he lands.

Jones is much less mobile than the other QBs talked about so far, but he throw a pretty good ball. Like Tua, it is difficult to know if the weapons around him have had a significant impact on his ability to perform. Many are already chalking Tua up as a bust for this very reason, so that may hurt Jones’ stock as the draft nears.

Kyle Trask is being compared to Big Ben, and I like the comparison. However, I don’t think Trask comes near the ceiling that Roethlisberger has hit throughout his career. Like a few of the other QBs on the list, Trask was surrounded by great talent. This became obvious in the bowl game when many of his receiving options opted out, and he struggled.

Trask doesn’t overly impress because I believe his receivers helped him out a lot, both with 50/50 balls and YAC. Trask is more a gunslinger than the rest of the QBs on the list, so he could be enjoyable to watch if he gets the chance, but his success seems dependent on where he lands and how he gets brought along.

Kellen Mond – Mond coming out surprised a lot of people. He certainly won’t go higher than the other QBs on the list, but he is an interesting prospect nonetheless.

Jamie Newman – For better or worse, Newman opted out after transferring to Georgia on the heels of a good season with Wake Forest. There are still a lot of unknowns when it comes to Jamie Newman

Feleipe Franks – Franks lost his job to Trask after getting injured. He then transferred to Arkansas and put up decent numbers. He definitely has the frame to be an NFL QB. The question is: Does he have the talent?.

Ian Book – Barring a great Senior Bowl, Ian Book will end up as a third-string QB. He won a lot of games in college, but he didn’t show much to inspire hope in NFL teams.

Sam Ehlinger – Ehlinger is also set to play in the Senior Bowl. He disappointed most of the time with an underachieving Texas team, so I don’t expect him to be more than a day 3 flier.